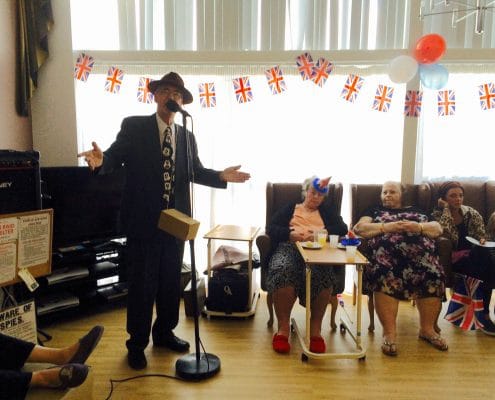 Aspen Grange care home in Braintree marked Victory in Europe Day with a special celebration at the home.

The home held a 1940s themed party with a performance by local entertainer, Derek Firman, who sang all the war-time classics and was dressed in 1940s uniform.

The home was also decorated with Union Jacks and refreshments were available for all guests.

Resident Sidney Koenick (89) served in the Army during World War II. He was awarded British Campaign medals and has two of the 1939-1945 medals and his defence medal that he proudly wears every day. Sidney has many memories of the war, particularly Winston Churchill’s broadcasts and when he took part in the Victory Parade in London.

Resident Leslie Lee (89) served in World War II in the Navy and Margaret Connor (96), who is also a resident, was a Corporal in the Auxillary Territorial Service (ATS) serving as a transport driver, for which she was awarded British Campaign Medals.

Based on Coldnailhurst Avenue, the home offers residential, nursing and dementia care for up to 49 elderly residents.

Rhoda Casey, Manager of Aspen Grange said: “It was really important for us to celebrate VE Day as it was a poignant landmark day in history for many of our residents. Lots of our residents have memories of both WW1 and WW2 and fought in the war, so it was great for us to listen to them reminiscing – we all learnt a lot.

“The party was fantastic and all of our residents enjoyed the day, we’d like to say a big thank you to Derek Firman for entertaining our guests.”

Click here to view the original article from Recognition PR

Back to news
The nurse crisis. Is 2015 the year to reverse the mistakes of Project 2000? Is it time to turn our back on graduate-only entry to nursing?
Scroll to top
We use cookies on our website to give you the most relevant experience by remembering your preferences and repeat visits. By clicking “Accept All”, you consent to the use of ALL the cookies. However, you may visit "Cookie Settings" to provide a controlled consent.
Cookie SettingsAccept All
Cookie consent