You are here: Home1 / News2 / We should be spending the HS2 money on social care – The Guardia...

We should be spending the HS2 money on social care

Why is the government progressing with the high-speed rail link when it can’t afford to pay the care bill for vulnerable people?

Of the many challenges facing the country today most would agree that funding adult social care is pretty high on the agenda. Over the past 20 years the looming shadow of a growing older population has caused successive governments sleepless nights, and various commissions have been clear in their findings. The latest, chaired by Andrew Dilnot, begins by stating that the “issue of funding for adult social care has been ignored for too long”.

The Association of Directors of Adult Social Services (Adass) has recently advised that already having had a £2.68bn reduction in funding since austerity measures were introduced it now anticipates a further cut of £800m over the next 12 months. It goes further – its president Sandie Keene said: “Directors everywhere are well aware of the difficult economic choices the country is facing and having to make. However, it is absolutely clear that all the ingenuity and skill that we have brought to cushioning vulnerable people as far as possible from the effects of the economic circumstances cannot be stretched any further, and that some of the people we have responsibilities for may be affected by serious reductions in service – with more in the pipeline over the next two years.” 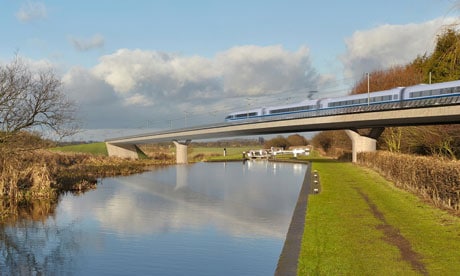 The money earmarked for HS2 should instead be spent on funding adult social care. Photograph: HS2/PA

The reality is that we are already having to make difficult choices about which of our vulnerable are given access to funding for care and which are simply going to have to suffer the indignity of relying on the generosity of friends and family. No amount of ring-fencing or reallocation is going to address this problem.

In the light of this desperate and wholly unacceptable situation the government is insistent that, as a country, we simply cannot afford not to build HS2. The original £33bn budget has already been shown to have been massively underestimated and now looks to be closer to £42.6bn. This is due to be incurred over a 23-year period from 2010 to 2033 when it’s anticipated it will finally be completed. This equates to £1.85bn per annum – which would pretty much fix the problem of adult social care funding.

We could debate all year long about whether the scheme has merit and whether it’s environmentally the right thing to be doing, assisting a few hundred people to commute 100 miles each way to work. We could argue whether shifting people into the already overcrowded city of London is indeed helpful, particularly to the economy of the hard-hit provinces. We could consider whether our infrastructure development really considers the availability of housing, future technologies, and long-term job creation. We could question the validity of an argument that the project creates jobs when we then award the contract to build the rolling stock to a German company. But I think that all of this misses the point.

The simple truth is that we cannot afford it. It’s like me arguing to my wife that we need a private jet when I can’t afford to put a meal on the table. It should also be remembered that it’s the taxes and NI contributions that tomorrow’s elderly and vulnerable people have paid in – in the expectation that they would be cared for in their time of need – that is being spent on getting a couple of thousand people into London half an hour quicker. Who’s going to tell them they can’t have the care they need because we spent the money on a really quick train to replace the already fairly quick train.

Isn’t it time to stop the debate and face the reality? It doesn’t matter how good the arguments are for or against, while we are unable to deliver the care that is needed for our society’s frail, sick and dependent, we should forget the idea.

Back to news
Star ratings – a solution yes, but to what problems? – Healthcare B... New finance service launched for care home operators
Scroll to top
We use cookies on our website to give you the most relevant experience by remembering your preferences and repeat visits. By clicking “Accept All”, you consent to the use of ALL the cookies. However, you may visit "Cookie Settings" to provide a controlled consent.
Cookie SettingsAccept All
Cookie consent